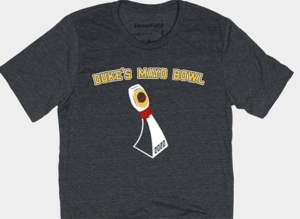 Charlotte, North Carolina (December 31, 2020) – The Charlotte Sports Foundation (CSF) and Homefield Apparel have teamed up for a second t-shirt sale for charity. Homefield will produce limited edition “Duke’s Mayo Bowl Trophy” t-shirts for sale to the public, with proceeds going to Second Harvest Food Bank of Metrolina in Charlotte, N.C.

The shirt captures the ingenious fix of the 2020 Duke’s Mayo Bowl trophy by the Wisconsin Badgers after a postgame mishap in the locker room following their victory over Wake Forest.

This sale comes after the wildly successful “Duke’s Mayo Ambassador” shirt sale in the summer celebrating Duke’s Mayonnaise as the new title sponsor of the Duke’s Mayo Bowl. A total of $7,005 was raised over a three-week period. That resulted in over 49,000 pounds of food Second Harvest Food Bank was able to provide the Charlotte community.

“We are delighted to team up again with Homefield Apparel on this second charitable fundraiser for our community,” said Danny Morrison, executive director of the Charlotte Sports Foundation. “We couldn’t be happier with the 2020 Duke’s Mayo Bowl and both teams. We were proud to present the Duke’s Mayo Bowl trophy to Wisconsin. This shirt sale captures the fun fix by the Wisconsin players and also provides funds for the Second Harvest Food Bank to impact hunger in the Charlotte community.”